Has it been a week or what? It most definitely has, which means it’s time to kick back, relax and read on as we dig into Google’s trending searches list to find out what the world wanted to learn more about this week.

The Grand Old Party
With 10 candidates on stage for the prime-time event, Thursday night’s Republican presidential debate[2] debate did seem quite a bit like a party. An estimated 24 million people[3] tuned in to watch the broadcast on the Fox News Channel (a record for the network, and cable TV, it turns out), and searches for “Republican debate” topped 5 million[4].

Not surprisingly, the candidates themselves generated some serious search action. Donald Trump claimed the “most searched” position in the days before and hours after[5] the event, and held on to the spot for nearly all of the debate itself, save a few appearances from Ben Carson, Carly Fiorina and Lindsey Graham.

See a full-size version of this incredible data viz here. You can also explore the most searched issues during the debate as well — education, taxes and abortion all took turns in the top spot.

Jon-Voyage
All good things come to an end, and this week the world said goodbye to Jon Stewart — at least as host of The Daily Show. Airing just moments after a debate that was ripe for Stewart’s particular brand of editorializing, Thursday night’s show was his last. Searches for the (now former) host topped 500,000 this week.
[7][8] 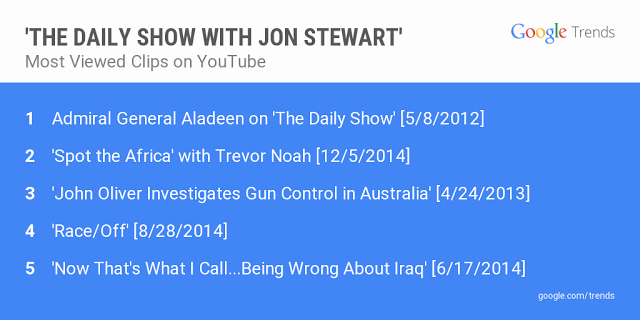 Check out another cool data viz — this one on search interest in Jon Stewart across the United States — right here.

The Doctor is in
Artist turned producer turned mogul Dr. Dre gave us all a gift this week — his first new album in 16 years. Compton — which Dre is calling his grand finale[10] — is self-reflective and grand in all the best ways, and dripping with appearances and collaborations from generations of other artists. It also brought in an impressive 200,000 searches[11].

Makeups and breakups
Continuing what seems like a very common theme this summer, the week’s trending searches had no shortage of celebrity couple gossip. Jennifer Aniston, who pulled off a surprise backyard wedding to Justin Theroux, made the list with 200,000+ searches[12]. The world panicked (and searched 100,000+[13] times) following news that Will Smith and Jada Pinkett Smith were divorcing — news that turned out not to be true at all, according to the couple. Reba McEntire[14], however, is definitely separating from her husband (100,000+ searches for that news), as are Gwen Stefani and Gavin Rossdale[15] (200,000+ searches) — and there’s no doubt about that one, either.

Posted by Megan Slack, who searched this week for [japanese candy delivery]